The Battle Arena (a.k.a. Battleverse) is a multiplayer PvP (Player versus Player) mode that allows players, or teams of players, to fight each other. PvP will only be allowed when entering a Battle Portal, taking players into a battle type arena. Ten players will be able to battle it out in a test of skill and team based cooperation.

Currently there is two types of gamemodes, Capture the Flag and Team Deathmatch. Other gamemodes will be released in future patches/updates.

This is the home of the Revenant.

Players can join a Battle Arena match using the Battle Portals in a Club World. Portals will take players to custom Battle arenas that are made by the club world with players who enter the same portal and server (NA and EU will have separate servers even if players use the same portal). These portals will take the player to an entire new server that will host the PvP match.

Unlike the Adventure Worlds (PvE gameplay), players will be able to attack each other. All players will not have their Adventure Gear while in the arena and will only rely on their EXP level and equipped Banner. Several Power-up Cubes can also be found all around the arena to give players an instant boost in health, speed, defense, or any other type of ability to gain specific functions that help players get strategies to kill another players easier. Depending on the gamemode, players will have to follow the required task/quest to win the game.

Capture the Flag is a gamemode where two teams of trovians (five or three players for each team) battle against eachother while having the main objective of capturing flags for each team. Each team must capture flags for their team in order, and the team with the most flags captured wins the game. In this game mode, you can’t use your mount and your wings. Everyone will get stats boosts and can pick a power ups to boost their stats further temporarily.

There two types of flags, the Flag of Strife and the Team Flag. The Flag of Strife can usually be found in the middle of the arena with a purple coloring. These flags are worth one point each once captured. Team Flags however are located in the team's "base" with its corresponding team color. These flags are more difficult to capture than the Flag of Strife but is worth three points each. Both flags can be dropped by the player either by preforming an ability that makes them drop the flag, preforming a dodge, and/or being killed/defeated in battle.

Team Deathmatch is a gamemode where two teams of trovians (Matches consist of 5v5 or 3v3) battle against each other with the main objective of killing each other's team members. Each team must kill off the enemy team, and the team with the most kills wins the game.

Players can obtain various rewards that will benefit for their PvP gameplay as well as progress towards their Battle and Mastery Ranks.

Players can get 500 experience points (750 on Saturdays; 1,000 with Patron status) for each Arena they participate in.

After completing each match, players will earn Battle Experience that will count towards their overall Battle Level. Players can earn experience if they have at least captured a flag or killed a player. No experience will be gained if players do not participate in the game or are stationary for the entire game (a.k.a. AFK). This Experience will count towards their level, which will grant a reward every 5 levels. Rewards include extra Battle Factor, special Radiant Auras and a War Plane Mount.

Battle Boxes can be obtained after every match when players complete their Battle Experience bar. Depending on their Battle Factor will be the amount of boxes the player can receive. Players can obtain more boxes through rewards from their Battle Level and/or have previously purchased the Arena Pack. These boxes will only contain Banners as a rare drop, which can be used only in the Battle Arena to give a boost of stats and different accessibility to abilities from Power-up Cubes.

Players can recieve a Battle Box for every ~3,000-3,500 points statistics which can be checked with the command /getbattleboxinfo in chat. This statistic is increasing during playing (only depending upon the time) and resets after receiving a Battle Box. You can get 3 boxes a day and as many boxes a week as possible with your Battle Factor.

Banners are equip-able items that gives the players a boost of stats in the Battle Arena. These banners can only be used in PvP matches and cannot be used in PvE gameplay. Banners are obtained through opening Classic Battle Boxes, players will get a random banner with its own unique set of stats, abilities, banner pole, and banner flag. The rarity of the banner can be determined in the item's name and the quality of the banner's flag. The banner that has a flag that is more tattered will have the lowest possible stats while the banner in great condition will have better stats. Banners (once looted from a Battle Box) are finalized and cannot be improved.

Players can discard their banner to gain loot to trade. Using a Loot Collector will deconstruct the item into a Arena Coins. These coins can be used to trade for other rewards (Battle Mounts and Wings).

Other rewards that players can obtain are special Battle Arena Mounts. These mounts can be obtained from the Battle Broker using Arena Coins or from the Arena Pack. There is also an unlock-able plane mount after achieving Battle Level 50. All of these Mounts can show off the player's banners anytime they use the mount.

Players can get a head start in receiving Battle Arena Rewards with the Battle Pack that can be bought in the in-game Store. This 3000 credits pack can give the player three exclusive mounts, +2 Battle Factor, and x20 Classic Battle Boxes. The mounts included in this are not available for purchase through the Battle Broker NPC along with the bonus Battle Factor. 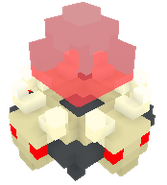 The Battle Portal, looks similar to an Uber Portal

Player Tombstone that appears from players upon death.