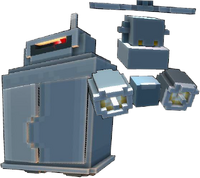 Every zone or biome in Trove has its own specific creatures and monsters, which can be more or less a challenge for the player. While most are hostile and will attack any nearby player, there are also a few which stray from this behavior. Killing creatures grants the player experience, a chance for equipment, and a chance for materials such as Glim, which are often used for crafting.

Hostile monsters are affected by the environment in the same ways as the player: they are subject to Environmental Hazards (mainly fall damage and lava), and they can be hurt by some of the same things that harm the player. All monsters are resistant or immune to certain hazards, such as spikes and Flame Turrets. Most monsters have an advanced pathfinding system that allows them to traverse complex mazes to get to the player but cannot jump up any higher than or equal to two blocks. They will also naturally avoid holes in the ground unless the player is in one of them.

Most enemies drop items when killed. Enemies that can drop items have several shared possible drops, in addition to unique resources that vary by enemy type. Enemy-specific drops are detailed on individual enemy pages; the rest can be seen here.

Some NPCs that drop loot such as Pinatas do not use these drop tables.

The creatures here are classified by the either the biome or situation where they can be found in or their type. For more details, click and view their individual pages.

Enemies are (usually) hostile NPCs or entities. Most enemies can both harm and be harmed by players, with a few exceptions.

These only appear during specific seasons.

These are tied to specific events and/or Golden Thread objectives.

These have been removed in past patches and can no longer be encountered naturally.

Unused mobs are found in the source code and/or game files, but are not being used at this time. Can be seen to have their own trophies or tied to certain events.

Hidden monsters are found in the source code and/or game files, but have no known plans for usage.

Bosses are large, powerful enemies that are usually rarer and/or only found in a specific location or during a specific event.

Spawns are enemies or entities that only appear when spawned by an enemy/boss ability or modification.

Hidden spawns are found in the source code and/or game files, but have no known plans for usage.

Allied NPCs help or interact with players in some way. Players cannot harm them directly.