The Chloromancer is a Ranged class from the Prime world of Trove. This mysterious spell-caster from beyond the plains grows friendly plants to support its allies.

If you play Rift, you can complete a quest in it to unlock the Chloromancer for free; speak to Chloromancer Evort in your main city twice, then use the Trovian Class Cube put in your inventory to receive the class.

Note: Chloromancer gets a +20% Maximum Health boost at the start without any gear/gems.

The Chloromancer is a Support/Damage class, being able to deal hefty area of effect damage as well as providing a potent amount of crowd control or healing when needed.

The Chloromancer is a very good support class. They are able to do some powerful area of effect damage as well as a deadly slow from Leafy Lashers, and can heal allies plus burst enemies through Blooming Pollinators and their basic attack.

The Surestrike Emblem and Arcane Emblem with the Valorous Vial are the best combo, as your high damage per tick from Leafy Lashers and basic attack can ensure Flasks being regained through Valorous.

There are several Allies that can be used to benefit the Chloromancer.

Using a Leafy Lasher plus a number of Blooming Pollinators into your basic attack will deal a hefty amount of area of effect damage to a small area, consistently keeping the Leafy Lasher up while planting Blooming Pollinators, plus Emblems like Surestrike and Arcane will do short work of Dungeons and Shadow Towers. If you need to cover a large area in plants, use Sow Chaos.

Ranged enemies: Your only way of dealing with Ranged enemies is your basic attack, which is significantly weaker than your plants. It's best to spread plants around the ranged enemy so that they will move into your plants.

Spoiler from the forum post showing a screenshot of the class with a flower as part of its ability. 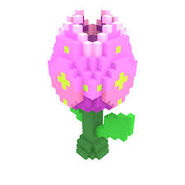 The Chloromancer (Rift) and The Chloromancer (Trove)
Add a photo to this gallery
Retrieved from "https://trove.fandom.com/wiki/Chloromancer?oldid=104340"
Community content is available under CC-BY-SA unless otherwise noted.