Dino Tamer is a Ranged class of the Prime World of Trove. Hailing from the Desert Frontier but lost in a land that time forgot, this ravenous ranged ruffian mastered a unique combat style for surviving in the harsh wilderness. This timely explorer travels through time to the a inhospitable primitive world of the Jurassic Jungle joined with some Jurassic friends to survive the dangerous worlds of Trove.

A dino-like class was hinted by the developers during several livestreams, a few weeks after the release of the Mantle of Power expansion. They did not confirm it was in development until it was hinted on stream mid-May 2016, where they said it would be a class that has "dino friends" to fight for the player. The PTS update on May 26 included files for the class showing its ID, "c_p_dinotamer," and a mounted dinosaur ally as the ultimate ability. The Dino Tamer was first revealed on Day 3 of the Twitch Gamescom Livestream (rewatch the stream at 6:26:58) along with the new Jurassic Jungle biome.

As a Dino Tamer, your main advantage is your ultimate which as said before, gives your basic attack an aoe and instantly charges your net. These abilities can be used in conjunction to allow for high damage. Going into combat apply your ultimate after which you should instantly drop a net so the enemies get the debuff. Do not apply dinosaurs unless the world is too hard as they usually are a decrease in dps in the lategame.

The Dino Tamer also shines in the Shadow towers due to the crowd control capabilities of the Net. This means that the trash enemies will slowly die due to the rebuff, allowing for quite a lot of damage to be sustainably dealt.

constructed model of class /w satchel on the side 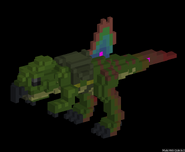 constructed model of a dinosaur for an ultimate ability

Add a photo to this gallery
Retrieved from "https://trove.fandom.com/wiki/Dino_Tamer?oldid=107272"
Community content is available under CC-BY-SA unless otherwise noted.