Dracocolatl is a large World Boss that spawns rarely in Candoria biomes. When defeated, it drops several Candorian Dragon Egg Fragments based on the difficulty of the world, which can be used to craft Dracocolatl, the Mellower at the Dragon Crucible.

Like other World Bosses, Dracocolatl has significantly more health and damage compared to dungeon bosses in the same difficulty, meaning it's best approached with a group of players at the matching power level.

It can heal itself by standing on the Hot Chocolate blocks it spawns, so players need to watch where they land and move it away.

It can perform three attacks:

The number of Candorian Dragon Egg Fragments dropped varies based on the difficulty Dracocolatl is defeated in:

The orange gumdrop that contains the portal to Dracocolatl's lair(partially underground). 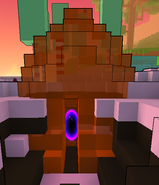 The portal inside the gumdrop.

The lair, with Dracocolatl inside.
Add a photo to this gallery

Retrieved from "https://trove.fandom.com/wiki/Dracocolatl?oldid=99253"
Community content is available under CC-BY-SA unless otherwise noted.