Drumsticks, the Griffon is a mount that is featured in the Griffon Fan Art Contest. The contest was hosted by one of the Trove developers, Twixler, and this mount was given to winning participants of the griffon fan art contest.

Before the Patch - 1/31/17, this mount could only have been unlocked via winning the griffin fan art contest or from Chaos Chests. Now, it is craftable in the Mount Taming Bench.

Preview of an old Griffon Model

Image as seen in the Art Contest 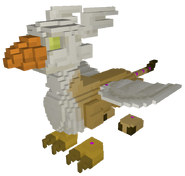 Old Griffon Model
View Model in Troxel
Add a photo to this gallery
Retrieved from "https://trove.fandom.com/wiki/Drumsticks?oldid=106109"
Community content is available under CC-BY-SA unless otherwise noted.