The Forbidden Spires (also known to be called Ancient Heights and Restless Range) is a Prime World biome filled with an Eastern-themed landscape. It exists in any Adventure Worlds of any difficulty, and has a themed world primarily featuring it in Uber-6, and can appear in either small patches or massive chunks of land. Cinnabar and Fiery Feathers can only be obtained here. Resources here are necessary for crafting the Ancient Phoenix mount as well as Stellar Rings.

Forbidden Spires biomes are displayed on the map as yellow areas with gold coins. The biome has a chance to spawn two different variants, the Ancient Heights and the Restless Range. The Ancient Heights consists of high mountains and rivers with bonsai styled trees. The Restless Range is the same as Ancient Heights but is in a raining atmosphere with bamboo stalks. These lands are filled with towering mountains with Chinese inspired architecture around the region as Lairs and Dungeons.

Many different mobs will spawn in these lands. Enemies that roam this biome include ancient beings such as Jade Scarabs and occasionally creatures such as Spire Rams. Various Dragon Ogres (Sapphire, Jade, Amethyst, and Cinnabar) and Terracotta Giants has a chance to spawn rarely in this biome and will always have a boss modification and a large amount of health, making them formidable opponents.

Colors that are taken from generated environmental objects and Frameworks.

*Colors taken from plants that spawn around the biome.

Colors that are taken from generated structures and Frameworks. 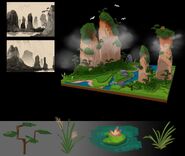 Concept art for the biome

Image of the biome and a new Dungeon leaked via Twitter @TroveGame.

Lead developer "Din O" with the background image of the biome as seen in the Producer's Letter.

Official image of biome at night and another new dungeon from Trove Website.

Add a photo to this gallery
Retrieved from "https://trove.fandom.com/wiki/Forbidden_Spires?oldid=103649"
Community content is available under CC-BY-SA unless otherwise noted.