Not to be confused with the legendary hero, Ganda.

Ganda, the Sky Shepherd is a mount which drops extremely rarely from Troves of Wonders bought from Merchant of Marvels on a Golden Vendor Ship in the Treasure Isles biome. This mount along with the other Birds of Paradise, Mizaia, Breath of the Evergreen and Koroki, the Sower of Chaos can create a trail of special blocks on certain areas, in this case, Ganda can temporarily create a solid golden path on air blocks, allowing users to walk on air and to have infinite jump. The path doesn't disappear for a while behind Ganda, so some players like to take part in Ganda trains, in which players stand on Gandas trail behind someone with a Ganda and travel around collecting resources, mostly Nitro-Glitterine , to sell or trade. Due to the extremely low drop rate of Ganda, it will generally cost less to just save up a few million Flux and buy him from another player than take chances buying lots of Troves of Wonder. 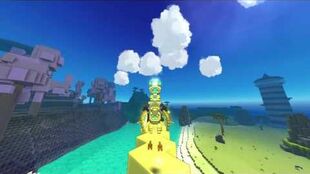 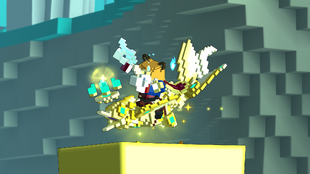 Ganda, the Sky Shepherd in /epicpose
Add a photo to this gallery

Retrieved from "https://trove.fandom.com/wiki/Ganda,_the_Sky_Shepherd?oldid=109572"
Community content is available under CC-BY-SA unless otherwise noted.