The Hub is the central area of any Trove world. The Hub contains many useful tools players can use to progress their characters further, including various Crafting Stations, a Barbershop, and multiple Adventure Portals. Players can meet in the Hub to trade, show off their Cornerstones, or share goods with other players (such as pinatas purchased through the in-game Store).

The Hub is considered its own world type, and as such there are special rare fish that can only be caught here. The elusive Hub Hugger can be caught in water in the Hub. The other fish is the Charred Hub Hugger and it can be fished up in the lava located at the southeast corner of the Hub world, or in the lava by the Dragon Crucible.

Players can enter the Hub instantly by using a Hub Portal (which is created in the Crafting Menu and placed in build mode).

Players can also reach the Hub by pressing and holding the H key, but this has a three second cast timer. You can do this anywhere.

Directly in front of you when you spawn in is a giant statue of the Sun Goddess. In front and to the sides of the statue are three Trovian Atlas globes. Interact with these to enter different mysterious worlds, if you have the power rank. To the left, there is also a Radiant Dayspring, where you can craft boons and other items with your daily tokens. And to the right, there is a Radiant Merchant, where you can trade Radiant Sovereigns for goods such as Party Animals and Golden Chaos Chests. An inscription at the front of the statue reads: Elysia, The Sun Goddess Let us, too, face the darkness with courage and resolve, that our Lady's sacrifice not be in vain. 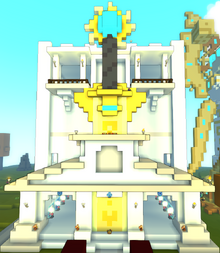 Located South East is club portals. Each floor contains a Clubit Minting Machine, a Club Merchant, and a Club Decor Merchant. This is the building where you can travel to many different clubs and use their NPCs to get quests and purchase exclusive items. Completing quests from their Hero NPCs helps give them a little bit of club experience and you get Adventurine. Portals of active clubs show up here. No portal show up on the same floor 2 days in a row.

The first floor contains portals that go to new clubs.

The second floor contains portals to clubs with many porps.

The fifth floor contains a Club Merchant Prince (that doesn't sell anything). 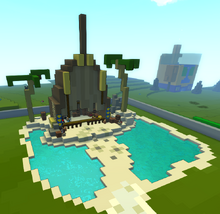 Located North West of the spawn in Hub, the Pirate Outpost is always looking for players to trade glim for fishing items. The NPC Saltwater Sam sells basic boats, fishing poles, lures and sails. The Nautical Assembler can be used to craft new kinds of fishing poles, allies, boats, and sails. 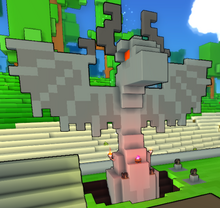 To the right, on the dragon coin platform, Luxion of the Golden Hoard, spawns on or around the 1st and 15th of each month. His inventory contains several exclusive, event, and rare goods. Since he loves Dragon Coins, these are his currency he trades his goods for. 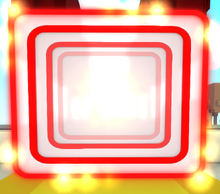 Some dragon challenges require you to go to the hub, the Racing and Coin Collecting ones. The portal spawns in the hub behind you when you spawn in. 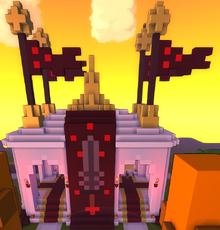 To the West, there is the red and white building of destruction and rage, this is where you can battle other players in a game of 5 vs 5 Team Death Match. After some time, you earn Arena Coins, which you can trade with one of the two Battle Brokers for mounts or even wings. 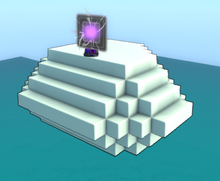 To the West, there is a portal to a secret hub, most popularly known as the Shadow Hub, a fragment of memory left behind from Alpha. To get there, you need to head West deep into the Sea of Regret. If you attempt this journey, it is recommended you have high amounts of jump and health regeneration. Also, the location is not always the same, but the X coordinate is always around -2600. Another way you can tell you are close is by looking at the map and noticing that there is virtually no Lost Isles left. 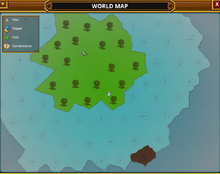 Though now useless, there is a Dragonfire Peaks chunk to the South East of the hub. This was used to fish up the Charred Hub Hugger before the Dragon Idol was added. It can still be fished up here, if you chose to travel there though.

2017 Christmas Hub
Add a photo to this gallery
Retrieved from "https://trove.fandom.com/wiki/Hub?oldid=91390"
Community content is available under CC-BY-SA unless otherwise noted.