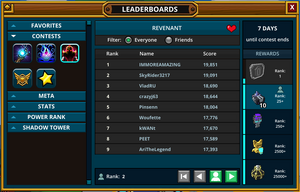 Leaderboards is a ranked scoreboard for players to compete with one another based off their stats. This was first introduced during the Leader of the Block Patch. This list helps compare a player's achievements to those of other Trovians. Players are ranked on various stats between every Trovian and friends, giving a better way to quickly settle disputes about who is better at something.

During the release of the Mantle of Power Expansion Launch, players can now compete in weekly contests to earn rewards.

The leaderboards can be accessed by pressing the "K" hotkey.

The main leaderboard UI is separated into three different parts: The category list, the scoreboard, and the contest/rewards list.

On the left is a list of categories of leaderboards. Each category is separated into different tabs. Players can favorite their category and it can be displayed on the Favorites list at the first tab. The second Tab is dedicated to contests which will grab from different sections and showcase the contest.

Meta contains categories that are based off rankings of Mastery and/or Power Rank that players have collected from the start of the game. These contain the following categories:

Stats contains categories that are based off player's stats that players have collected from the start of the game. These contain the following categories:

Power Rank contains categories that are based off player's Power Rank for a specific/individual class. These contain the following categories:

Shadow Towers contains categories that are based off player's time completion in Shadow Tower runs. These contain the following categories:

Retired contests are removed due to future updates, outcomes of community feedback or undesired by the development team. These are the following contests that won't be showing up on the Leaderboard Menu:

Every week there are 3 random class contests, which give rewards depending on your Power Rank (PR) and rank on the leaderboard. The first 2 rewards are score based, while the last 3 are rank based. The rewards, in order, are: An Empowered Gem Box (at 2500 PR), 2 Empowered Gem Boxes (at 5000 PR), a Class Gem Key, 10 Dark Chaos Vaults, and 50 Shadow Pinatas.

Every week there is a random contest that is based around on how much you do a certain concept in a week. These contests include Lairs and Dungeons completed, Enemies killed, Lootboxes opened, Blocks destroyed, Blocks placed, and Fish caught. The first 2 rewards are score based (The numbers vary on the contest), while the last are rank based. The rewards, in order, are: 50 Jade Clovers, 20 Glittering Horseshoes, 10 Lapis Luckbugs, an Empowered Gem Box, and 5 Light Chaos Vaults.

Every week one of the 6 contests is always a Mastery contest, where it counts the amount if mastery points and all rewards are granted based on rank they are placed on. The rewards, in order, are: An Empowered Gem Box, a Ninth Life, a Golden Chaos Chest, 10 Light Chaos Vaults and 300 Party Animals.

Finally, every week there is an Experience earned contest, which rewards players Daily Loot Chests depending on the amount of XP they earned throughout the week (including while playing on max-level classes). All of the rewards are score based and all of them give Daily Loot Chests.

Retrieved from "https://trove.fandom.com/wiki/Leaderboards?oldid=102134"
Community content is available under CC-BY-SA unless otherwise noted.