Ludini, Patron of Playfulness is a Legendary dragon Mount that is craftable through five Dormant Block Dragon Eggs, obtainable as a rare drop from Adventure Boxes. Alternatively, this dragon can be automatically unlocked using the Golden Block Dragon Egg which can be obtained as a rare drop from Greater Dragon Caches or as a distribution from the creator (limited to several eggs). 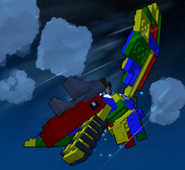 Retrieved from "https://trove.fandom.com/wiki/Ludini,_Patron_of_Playfulness?oldid=90202"
Community content is available under CC-BY-SA unless otherwise noted.