The Lunar Lancer is a Melee Spear user in Trove. This class is considered to be a follower of the Moon Goddess, originating from The Everdark, where the Shadow Tower is located.

The Lunar Lancer was hinted to be an upcoming class. This class introduced a new weapon type; the Spear. This was found within the blueprint files by a few Trove players and was announced on a Trion Worlds stream (Friday, July 24, 2015) with two teaser images, along with a rampant rumor that this class would be launching in September of 2015. The moves and model were later revealed on another Trion Worlds stream (Friday, August 21, 2015), along with revealing the Shadow Tower. It was also shown that the Lunar Lancer has a tail. The official release of the Lunar Lancer was scheduled to be at September 15, 2015 along with the Shadow Tower Update.

There are several Allies that can be used to benefit the Lunar Lancer, some of which can help survivability and/or increase overall damage.

Martial Emblem - The most effective emblem for the class, It will superbly boost your attacks when combined with Lunarform. It boosts your Physical Damage stat by 250%.

Shadow Shrike Emblem - Nothing much, but since you deal a heavy amount of damage, you will make this emblem stronger. Summons a temporary damage dealing ally.

Master Cheep Emblem - Just the same as Shadow Shrike, but obtainable through mastery.

Note: Lunar Lancer gets a +30% Physical Damage boost at the start without any gear/gems.

It is recommended to get higher energy regen rather than attack speed since you'll be spamming Crescent Combo. This class has a very low survivability, but deals the most lethal damage in game (Even beats Fae Trickster). It is still easy to overtake dungeons and lairs whilst standing alone.

Try to stick with your team, the LL is a bit weaker on the defense side than some other heavier classes (hence why people call it "squishy"). Use Crescent Combo and Blessing of the Moon to support your team during boss fights, or take out smaller enemies while the stronger classes take care of bigger enemies. Remember your ultimate also gives buffs to everyone nearby, so try to use it where there is high traffic (movement in that area). 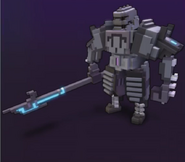