Mad Scientist is a cosmetic costume that can be used on the Pirate Captain class. It is unlocked by purchasing it at the Trove Store for credits, obtained from a Costume Mystery Box, or buying it off other players at the Player Marketplace. This costume is also included in the To The Nines Pack Costume Pack. 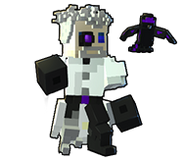 Add a photo to this gallery

Retrieved from "https://trove.fandom.com/wiki/Mad_Scientist?oldid=90895"
Community content is available under CC-BY-SA unless otherwise noted.