The Shadow Colosseum is the only possible dungeon that can spawn in the Shores of the Everdark. Unlike other dungeons, it does not require killing a boss; instead, it has a singular Cursed Skulls, which triggers repeated waves of Shadow Invaders. To complete the dungeon, at least 3 Darknik Warbots (labeled Shadow Golems by the quest objective) must be killed, and at least one player must survive for one minute (60 seconds). After this is done, an Everdark Vault will spawn instead of the usual dungeon chest.

In one of four sides of the Colosseum, a gateway will be open, leading into a large, mostly flat area. In the center, a ring is slightly elevated, on which the Cursed Skulls are located.

There are no traps. 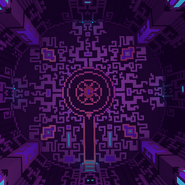 Inside the Colosseum.
Add a photo to this gallery
Retrieved from "https://trove.fandom.com/wiki/Shadow_Colosseum?oldid=83657"
Community content is available under CC-BY-SA unless otherwise noted.