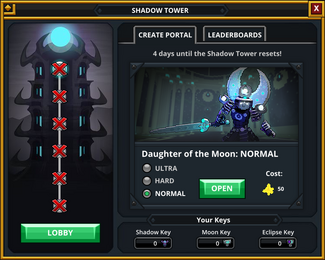 Shadow Towers (or ST for short) are a type of raid grouped dungeon that consists of several Shadow Arenas and/or Dungeons. These challenge players with more difficult enemies and rewards the player shadow themed items and gear improving items. A Shadow Tower can be accessed through Shadow Tower Portals in Club Worlds and the Shadow Tower Lobby. These portals will be opened via Flux to enter the tower; each portal requiring more flux for a higher difficulty.

They are best approached as a group effort. A maximum of 8 players can join a Shadow Tower at one time. The best way to find other players to join your Tower is to communicate via chat. Use the chat to find others at an appropriate level, and to discuss the terms of your Tower runs. Once players have been found, open the Tower and enter it.

The person who opens the tower has the last say about group members and can choose to /kick username anyone they don't wish to be invited at any time.

Once players are ready, they will enter into either an Arena or Dungeon, decided randomly for each boss and difficulty at the start of the week. Players will go through 3 sets of Arenas/Dungeons and then a Shadow Pinnacle (or Altar of the Moon) where they face off against the Shadow Titan.

Building is restricted in Arenas and Dungeons, and no blocks may be placed or destroyed.
(Boss Modifications also cannot change most blocks, although Ice Comet can turn spikes into ice.)

Arenas always have 5 waves of mobs, which appear in the following order:

The fight will not start until a player activates the Cursed Skulls in the center of the arena, which can be done by either pressing "E" or attacking it. Before activating the totem, groups should make sure everyone invited is present and has full potions. The monsters and numbers spawned will differ, depending upon the level that the leader has decided to choose.

Like regular Dungeons, they are explore-able and filed with numerous hazards and traps where players have to venture through to reach the totems that are located near the end of the dungeon. Each dungeon will have two totems each with its own wave of mobs:

The first Cursed Skulls will always have 2 waves of mobs, which appear in the following order:

The second totem will have only one wave, consisting of a Dream Monster.

After all 3 Arenas/Dungeons are completed, players will be sent to an empty room (labeled the "Shadow Pinnacle", or "Altar of the Moon" for DotM) with no traps/hazards and a Cursed Skulls in the middle. Activating the Skulls will summon the Titan the leader has chosen, including:

Players automatically die if they enter the Arena after the fight has begun. If a player dies while in an Arena/Dungeon, their tombstone will not appear and there is no way to revive them. Instead, they must wait until the current wave is completed to be automatically revived.

If an entire party is killed the Arena run will start over again from just before the totem is activated. Potions will be automatically refilled to the number on hand before the fight began.

In Hard and Ultra, a 50% bonus to damage is given to any class that is the only one of its kind. This is reduced to 25% for two of the same class and no bonus if there are three or more.

Waves of mobs and cursed skulls in other floors

At the end of the last wave, after killing the Titan, a Shadow Tower Vault will appear. A key that corresponds to the difficulty of the tower is needed to open the chest (Shadow for Normal, Moon for Hard, and Eclipse for Ultra). This chest can drop weapons and gear (of any Rarity above Legendary) and Shadow Shards (Shadow Caches for higher difficulties). Rarely, the items such as Titan themed Mounts and the Shadowy Banner can drop from these chests. During certain Holidays or Events, the chest may also contain themed items.

At the end of an Arena/Dungeon, there will be a small room containing different Crafting Stations mainly to serve as a resting place. The accessible stations include Personal Chest, Loot Collector, Rejuvenation Station, Trading Post, Class Changer (even though rarely used because of removal), and the Shadowy Market.

Completing Arenas/Dungeons also grants progress towards the completion of your Star Bar.

After defeating the Titan associated with the current floor, it will drop the souls listed when selecting the floor on the Shadow Tower screen. Titan Souls can be used to craft Titan's Treasures, which contain large quantities of flux, or they can be used to craft Shaper's Star Keys. Lunar Souls can be used to craft various Mounts, special Tomes and Wings, and Empowered Gem Boxes. These souls can only be earned once a week, and multiple runs of the same floor will not grant you additional souls. However, Shadow Shards and Shadow Caches, as well as equipment, can always drop even if you have completed the floor already.

Retrieved from "https://trove.fandom.com/wiki/Shadow_Tower?oldid=107005"
Community content is available under CC-BY-SA unless otherwise noted.