The Sky Realm (also known as Radiant Ruins) is a Realm World that can be accessed through the Realm Portal: Sky or Trovian Atlas . This world can only be accessed by players who have reached at least Power Rank 250.

In the "Take Flight" update, Radiant Ruins (a.k.a. the Sky Realms) were introduced along with wings, the only item able to explore the multiple sky Islands that make up this biome. Some of the loot that can be obtained in this biome are Crystallized Clouds, Radiant Shards, and the rare mount Nimble Nimbus as well as access to Runecrafting.

The Sky world only consists of a biome called Radiant Ruins, a world filled with floating islands that can only be explored with equipped Wings and/or with multiple jumps. The only dungeons that exist in the sky realm are small Dark Heart lairs that can be completed to receive Radiant Shards. This world consists of only one type of ore, Crystallized Cloud, that can be mined and used for Runecrafting as well as a chance to get the rare Nimble Nimbus mount. This world is the only world where players can get Radiant Caches that contain special loot. The only enemies that players will encounter are Radiant Giants.

In the beginning, the world was ruled by Elysians, and Trovians lived in peace and harmony. But jealousies arise, even between gods.

Shining radiantly in her kingdom in the sky, the Sun Goddess led the Elysians and Trovians with wisdom and compassion. Over time, the Moon Goddess grew jealous of this harmony and schemed to steal their devotion for herself. Working in the dark, she forged a secret pact with the shadowy Q’bthulhu allowing the forces of evil to enter the Inner Realms.

Evil rarely holds to its bargains, and Q’bthulhu and his minions were no exception. Battle was waged from dawn until dusk, and as the sun set on the day of the invasion, the Sun Goddess knew the realms would not last the night.

Left with a single choice, the Sun Goddess sacrificed herself in a radiant explosion that shattered her domain and repulsed the forces of shadow. With her last breath, she imbued the Trovians with her power, appointing them protectors of the realms to continue the fight.

A collection of majestic sky islands are all that remain of the sundered realm of the Sun Goddess. Each is covered with ancient, trap-filled ruins suspended over the crashing seas below. And each holds important treasure: runic knowledge of the Elysians filled with immense and mysterious power.

Bold adventurers can reach the islands of the Radiant Ruins through a special new portal and take to the air to explore the hidden secrets of their once-hallowed halls! 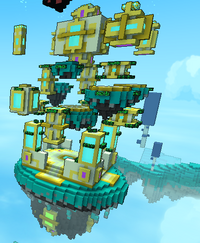 Darkheart lairs are scattered throughout the Sky Realm. Unlike most lairs, their main objective doesn't involve defeating enemies, instead it has the player collect shards within a certain time limit. Once completed, it will grant the player a small amount of experience. Radiant Caches can rarely drop when collecting Radiant Shards.

Some lairs can contain the S.O.A.R. Terminal that allows players to craft the Ultralight Flight Chassis, a quest item needed to craft the Neon Nightsky Wings or for the Meteor Chase Event

Retrieved from "https://trove.fandom.com/wiki/Sky_Realm?oldid=107375"
Community content is available under CC-BY-SA unless otherwise noted.