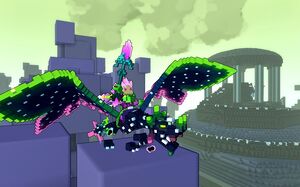 Stellaurion is the final form of the dragon line which will require players to consume 100 Starlight Dragon Souls.

All souls consumed can be seen through the player's badges. For every certain amount of souls consumed, players are rewarded with items and mastery points.

Add a photo to this gallery
Retrieved from "https://trove.fandom.com/wiki/Starlight_Dragon_Ascension?oldid=89767"
Community content is available under CC-BY-SA unless otherwise noted.