Todstrom is a melee boss enemy that appears in the Tutorial.

During the Shadow's Eve event, he can also randomly replace lair chests in the Cursed Vale biome and drops Candy Corn in addition to the standard Lair loot when defeated.

Todstrom rapidly swings a claw he holds in his left arm towards the player to attack at close range.

He can also occasionally strike with a large club he holds in his right arm for greater damage and knockback, but with a longer warning before attacking. 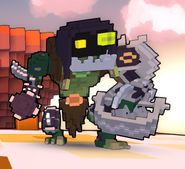 Todstrom as seen in the Tutorial World
Add a photo to this gallery
Retrieved from "https://trove.fandom.com/wiki/Todstrom?oldid=93116"
Community content is available under CC-BY-SA unless otherwise noted.