The Tomb Raiser is a Melee Magic user in Trove. This class is considered to be an undead summoner from the Cursed Vale biome.

Note: Tomb Raiser gets a +20% Maximum Health boost at the start without any gear/gems.

(outdated) Due to the Tomb Raiser relying mostly on the summons, it is recommended for players to obtain gear that has lots of Magic Damage and Energy Regeneration to get the maximum damage output. Players should refrain from using Physical Damage (since the class is entirely magic based and the summons damage are based off of the users "magic damage" even if they are physical attackers) and Attack Speed (This class uses a continuous laser and attack speed does not benefit in any way, similar to Dracolyte).

The basic tactic when using the Tomb Raiser applies to both solo and group scenarios; get the 6-minion Grave Goliath out as soon as possible, or whatever highest level Grave Goliath you can get before the boss fight/waves end. Due to your limited soul capacity (3) however, you will only be able to immediately summon, at most, a 3-minion Grave Goliath at any given time (A 4-minion Grave Goliath is possible by summoning a Grave Goliath first with 0 minions as a diversion, summon some minions, and then using time of the diversion to wait for your soul count to refill by 1. Note that this is only effective against single targets, as in a horde of enemies, some enemies will be close enough to you to re-aggro against your newly summoned minions, likely killing them before you can use them to summon your 4-minion goliath. Another, safer way to pull this off is to time when you throw your first 3 minions, so that your soul-count attempts to refill by 1 as you are in the middle of throwing your minions. This is, however, very buggy, and requires waiting 10 seconds should you miss your window of opportunity.). Always start your fights by summoning a 3-minion (or 4-minion) Grave Goliath. Periodically use Bonetourage to summon fresh minions and to avoid wasting souls you would have missed if you maintain the number of souls you have at 3, as well as Banshee's Boon, which will make healing your minions as well as damaging enemies much easier. When Banshee's Boon is finished and you're still recovering energy, AIM AT YOUR MINIONS. Your basic attack alone does VERY LITTLE DAMAGE wherein healing your minions in the hopes of summoning a stronger goliath is much more reasonable than trying to damage with your basic attack. Once you have enough minions to summon a 6-minion Grave Goliath, use your ultimate to summon it. Keep repeating these steps until you have either a 6-minion Grave Goliath and 6 minions out, ready to be sacrificed OR until your fight is finished.

Your minions and goliath take on aggro from mobs in a way that no other class can, thus it is your responsibility to summon your minions/goliaths in a place that is not difficult for your allies to reach. Although you won't have control over it, try to avoid situations wherein enemy mobs spread out because of the aggro your minions/goliaths take. In such a situation, it may be best to leave your minions/goliaths to die for the sake of concentrating enemy mobs into a smaller space, which will be more convenient for aoe/melee classes. Also note that the tomb raiser is extremely vulnerable without minions.

Note that some Mob Bosses will have effects that require heavy changes to your tactics, lest they become a threat. these include:

There are a few really interesting emblem combinations you can use, but it is recommend to use the bandolier for a flask since the emblems will provide more of a use when fighting enemies.

A quick note on Energetic and Zealous emblems in terms of their uses for Banshee's boon. Zealous will allow you to STAY IN GHOST MODE LONGER. Energetic will allow you to go into ghost mode MORE FREQUENTLY. In addition, Energetic will last almost as long as Arcane (roughly 8 seconds). If you have high enough energy regen, Energetic emblem might be more worthwhile, but use your discretion and personal experiences to determine what you want to accomplish with this class. 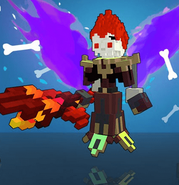 Tomb Raiser on a photo that was made for Necrofancy pack
Add a photo to this gallery
Retrieved from "https://trove.fandom.com/wiki/Tomb_Raiser?oldid=109410"
Community content is available under CC-BY-SA unless otherwise noted.