<< Back to the Guide listing 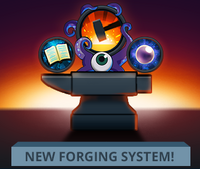 For an in-depth detailed information on all the forging, check out the Trove Forging Spreadsheet.

Here is a list of materials that are needed to be able to forge items:

How To Upgrade Items

This Guide will show you on how to improve equipment using the Forging feature.

In Trove you can break down items such as weapons, masks and helmets that you no longer need in the Loot Collector, When you have broken down the items you will get Flux. The amount of flux you get depends on the rarity and level of the item. High leveled shadow rarity items will give off more flux than regular shadow items along with its respective leveled Forged Shadow Soul.

Using the Flux you have gotten from breaking down items in the Loot Collector, you then need another item called the Forge. To "Forge" an item you open the forge and place the item you wish to upgrade in the slot. Here is where Flux (and Eyes of Q'bthulhu for shadow items) can be used to improve the overall stat value of the item. The value is ranked by pearls (previously they were stars) that can be seen next to the name of the equipment, reaching the maximum value of five will allow the item to be "Upgraded" to the next rarity or to another level (Mainly applies to Shadow Rarity items only). The transition of Resplendent to Shadow used to require a Perfect Prism but no longer does. Note that the amount of flux and eyes needed scales with the amount of times you have upgraded the items before, each upgrade increases the stats on the item by 2%.

Shadow items can be further "Forged" to achieve the highest stat values and class levels. Shadow items start off as "Shadow Level 1" (or just "Shadow") and can be forged further using Flux and Eyes of Q'bthulhu. As it reaches higher levels, it will require more forging materials as well as Forged Shadow Souls (only used to achieve the next level) to increase the level even further. To get leveled Forged Shadow Souls, you would have to create and/or deconstruct the respective shadow item that is within the same level (for example deconstructing Shadow level 2 items gives one Twice-Forged Shadow Soul). The souls are used simply "upgrade" the item's level just to achieve the next level. Currently there is a Radiant leveled rarity that exceeds Shadow lv. 5, but it requires three Purifying Dragon Flames. There is also a Stellar rarity that exceeds Radiant.

Here are the necessary materials to achieve certain levels:

It's estimated that it will require 324 Shadow lv. 1 gear to create one of Stellar rarity. (Needs new confirmation)

Once items are fully forged, then you will need to use a more advanced forge, also known as the Enchanted Forge. This forge will allow you to add additional stats and features. Items can only be found with a total of 3 stats, so a fourth stat can be added using Pearls of Wisdom (which can be found in Chaos Chests). This will add a fourth stat and the forged stat values will then carry on over once the stat has been added.

Using a Pearl of Wisdom on the advanced forge can also improve equipment by adding stat bonuses to the item. Stat bonuses can be determined by additional "

" multiplies the base stat value by 10% and stats with "

" multiplies the base stat value by 20%. Each Pearl will add an extra "

" to one stat if the item previously didn't have a fourth stat.

Most gear at a certain rarity can only be equipped at a certain class experience level. Items can be downgraded by using a Twinkling Tome in the Enchanted Forge Each Twinkling Tome will downgrade the required level use by one and can only be downgraded only until the item reaches the lowest requirement level (in this case level 1). This is useful for adding strong weapons for new classes.

Players can modify stats on an item for the pleasure of achieving the item that best suits the player's play-style. You will need to use a Chaos Forge to randomize the third and/or fourth stat on an item. Randomizing stats will require flux and Tentacles of Q'bthulhu. Using the chaos forge on an item with only three stats can only change the third stat that is listed, however if an item has four stats it will change both the third and fourth stats. The second stat can only be rerolled during the Second Stat Reroll Weekly Bonus. Stat bonuses will carry on to the new stat. Note once the item has been modified in the chaos forge, it will automatically lock any changes made to the item.

Retrieved from "https://trove.fandom.com/wiki/Upgrading_Equipment?oldid=106478"
Community content is available under CC-BY-SA unless otherwise noted.